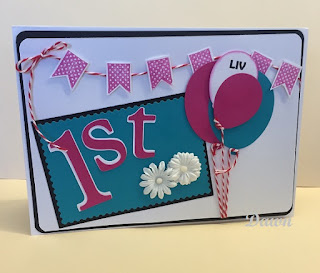 My little girl's first birthday coming up.  Can't wait.
This has multiple layers with the card base in white.  The next layer is black just to frame it out and then another layer of white.  I stamped a bunch of little flags using Distressed Picked Raspberry and a little rubber stamp from the dollar bin at Michaels and then just cut them apart.  Using pink, white and teal card stock I went to town cutting the balloons die (Simon Says Balloons) I cut a bunch and only used a few.  I then cut a stamp square from another die (Spellbinders) and then I framed that in black card stock.
I tied a bow at the end for some twine and then dragged the long tail through some glue and laid it down on the card in a curve.  I used dimension tape to go over the twine and lift up the flags.  The balloons were stacked and then dimension tape to lift them as well.  I tied the twine to the ends of the balloons and then gathered them all at the bottom.  I cut the 1st with the cricut twice using the shadow and then added some flowers from Recollections.

I would like to add this card to the following challenges.

Thank you very much!!

Sweet card and first birthdays are always special!! So glad you joined us at CTD!!

Wouw great card design, love the image. Thanks for joining us at CC&CC, good luck with the challenge.
Hugs Anneke 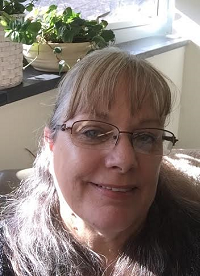 Dawn
I have three grown children and one absolutely beautiful grand baby. I work for the worlds largest living history museum and I'm entrenched in the 18th century daily. HUZZAH !! I love crafting - mostly paper but also glass and quilting.